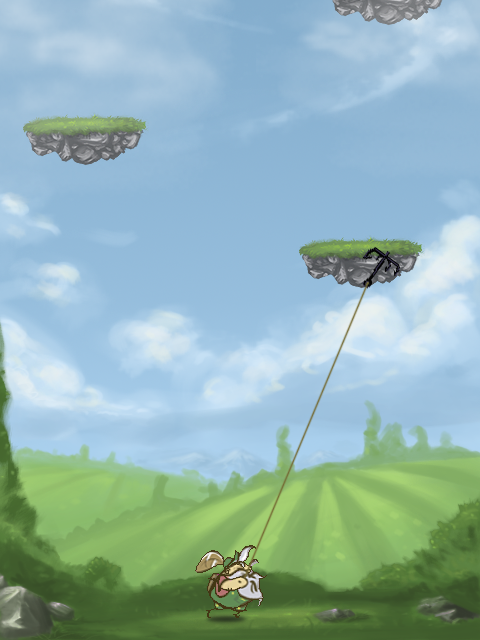 A few years ago a friend and I wanted to increase our productivity on our personal projects.  We liked the idea of game jams.  There some really good ones around now, but at the time needed to keep it a little more laid back and flexible with our work schedule.

The  first and sadly only game to come out of this was a very small, very short climbing game.  The rules were simple.  We had one week to make a game that used only 1 button.  This made us really change our focus from our normal comfort zones of game design.  In the game the climber would spin a climbing hook around in a circle and when the player hit the space bar he would throw it in the direction it was currently facing.  The goal was to hit a floating platform and swing up to it.  Once on the platform it began to crumble away so you had to keep moving.  The higher you got the faster the platforms would crumble.  I made the game with Game Maker, I think it was like version 5 or 6 at the time.  All in all the game was some pretty fun.  I still enjoy the idea and might revisit it some time down the road.  I have no idea where the game files are anymore so I would have to start from scratch, but I did have these screen shots sitting on my hard drive and thought it would be fun to share them.

Popular posts from this blog

September 03, 2014
Another collection of design/mockup sheets for a personal project.  The game was a very simple 2D platformer in the vain of Super Mario.  I got pretty far with the game but ended up getting busy with some contract work and the project feel into the ever growing abyss of personal projects.  When I get some more free time I'd like to try and re-visit it.

The visuals were really fun to work on.  Inkscape was used to flesh out my initial sketches.  Each character was broken up into pieces like a paper puppet.  After Saving the pieces out at high resolution they would then be put back together in Blender 3D where they would be animated.
Post a Comment
Read more

June 10, 2016
An old-school CSG inspired level editor add-on for Blender 3D. The add-on is still very much a work in progress but fairly solid for blocking spaces super quickly.  Just because graphic fidelity has gotten insanely good and hyper detailed doesn't mean we shouldn't look back how older games were put together, at least that is my opinion.  One thing I always come back to is how quickly the tools in the first 2 versions of Unreal Ed 2 and Doom level editors allowed anyone to block out a level, iterate on feedback or try an idea out.  So I just took some time to put together a similar pipeline right in my 3d package of choice.  I wanted to keep it simple and quick to try out level design ideas.  You can use it for simple white boxing of your level, break it up into multiple static meshes and import them into your game engine of choice or you can use that as your starting point to start more detailed modeling.  When you build the map you get a single static mesh that you can export…
Post a Comment
Read more


Yup its a giant mutant cow... Using Inkscape I made this game mockup after watching some MST3K late one night.  I thought it would be fun to play a game where you were the giant creature causing all of the destruction.  That is the reason the giant cow is on the right of the screen instead of the left. The player would move through the level from the right to the left, the opposite of pretty much every scrolling game... looks good in my head but might not work in actual game play.  Below are some images showing the progression from rough sketch to final mock-up.
Post a Comment
Read more